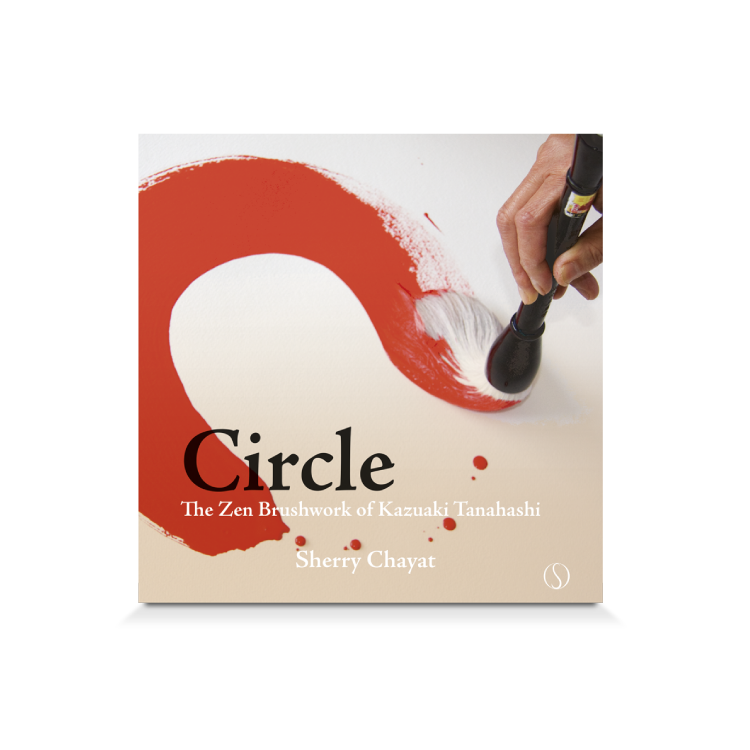 The Zen Brushwork of Kazuaki Tanahashi

Through the ages the circular form has been used by artists and spiritual adepts all over the globe to express that which is whole and true, that which is beyond conditioned, limited thinking. Whether precisely drawn or spontaneously bursting from the brush, a circle can convey insight into the mystery of ordinary life and can invite us into the realm of profundity.

A potter centers a wedge of clay on the wheel and magically, the thin-walled, round vessel appears. Circles appear in the medicine wheels and dream catchers of North American indigenous peoples. The circle we call ‘zero’ frightened the ancient Greeks, while Indian philosophers embraced it. Theologian and mystic Nicolas of Cusa (1401-1464) called the circle a symbol ‘whose circumference is nowhere and whose center is everywhere: the circle of infinite radius.’ A few centuries later, Wasily Kandinsky (1866-1944) falls in love with the circle, creating paintings in which flat, perfectly round colour disks floated against a black ground like celestial spheres. He wrote that the circle is ‘the most modest form, but asserts itself unconditionally.’

For Kandinsky the circle was the language of the cosmos, for Kazuaki Tanahashi, the circle is the language of this very moment. His bright, flowing multi-coloured circles eliminate the gap between East and West, between geometrical stillness and dynamic movement, between sacred and profane. They are at once intimate and all-embracing, inviting everyone into the circle of being, and radiating their vibrant message of hope and peace ever outward.

Circle is dedicated to the Zen brushwork of Kazuaki Tanahashi. After an introduction on circles and an essay on the circular form in human culture and in general existence, 85 pages show the reader a beautiful impression of the colourful work of Tanahashi.

‘A beautifully published book for a wide audience.’
From the review of Drs. C.J.G. v.d. Burg on bol.com

Here we sit, held by a gravitational field that radiates from the center of our round planet as it circles the sun, feeling the rhythmic cycles of the lunar-directed tides, the seasons, birth and death, loss and gain, out-breath and in-breath. We drop a pebble into a pond and the circles ripple outward long after they can be seen.

Our ancestors emerged from their caves and shaped round vessels among the circular forms of pebbles, birds’ nests, flowers beneath the celestial spheres. They made round dwellings: in the north, an igloo; in temperate climes, a teepee, a dome; in the heat of Africa, a cooling mud hut. In Dorset, England, we find the mysterious pre-historic construction of Maiden Castle; the equally mysterious circling cluster of stones from the Neolithic period that we know as Stonehenge, and the flattened ring called Castle Rigg. (It has been speculated that the stone circle of Castle Rigg was flattened in an effort to rationalize the irrational at the roots of sacred geometry – like the countless attempts made at squaring the circle.)

With the invention of the wheel came visionary architecture: the resplendent domes and minarets of Islam, the Dome of the Rock in Jerusalem, the Greek and Roman Parthenon and Pantheon, the domed and turreted cathedrals of Europe with their rose windows, and modern domes – from Buckminster Fuller’s residences to sports arenas and amphitheaters.

Perhaps it was the effort to rationalize the irrational that led to the significant architectural shift from circles to squares in our domiciles. Urban environments consume open space, demanding tight assemblages of rectilinear dwellings. Black Elk, the legendary holy man of the Ogalala Sioux, told of the psychically debilitating influence of such a change:

‘You have noticed that everything an Indian does is in a circle, and that is because the Power of the World always works in circles, and everything tries to be round (…) The sky is round, and I have heard that the earth is round like a ball, and so are all the stars. The wind, in its greatest power, whirls. Birds make their nests in circles, for theirs is the same religion as ours(…)

Our tepees were round like the nests of birds, and these were always set in a circle, the nation’s hoop, a nest of many nests, where the Great Spirit meant for us to hatch our children. But the Wasichus [white men] have put us in these square boxes [houses]. Our power is gone and we are dying, for the power is not in us any more…’

Yet even while making square boxes, the Industrial Revolution revolved around the circle: machines were fashioned of cylinders and coils, their arcing belts and pulleys producing circular objects so common we barely notice their shapes: the little wheels under our office chairs, the buttons on our shirts, doorknobs and spools of tape, light bulbs and manhole covers, steering wheels, baseballs and marbles, cisterns, jars, and cans, light houses, silos, records, com- pact discs, DVDs; the circular movement of hands around an analog clock face, mechanical corollary to time’s cycles and seasons (…)